A downloadable game for Windows, macOS, and Linux

ZFG is currently in development by Alex Deacy, in the UK. The game is a top down survival shooter in which the player's aim is to survive the exponentially growing horde of zombies that are infecting the natural population of humans. Find and put to use any weapons and ammunition you can find before the infected snowball out of control.

You start of the game with low ammunition at the start of a zombie apocalypse. As the game progresses you will see the zombies influence spread throughout the map, as they gain dominance. You must survive for as long as possible amassing ammunition and weapons to defend yourself. You’re not the only one trying to survive however the other human AI across the map will be face with the same challenges, civilians will flee the invasion seeking safety with police and military unity fighting back the hordes at your side.

The map is entirely simulated in that once it has been procedurally generated and populated with equipment and AI nothing is artificially added. This results in the source of the outbreak having to spread through a living breathing world where every action and decision the player makes impacts the progression of the game. The map can be quite large depending on the power of the computer as larger maps result in more AI, but once you do come to the edge rather than imposing an impenetrable wall all edges loop around to provide freedom of movement to both you an AI.

The AI are not given any inherent knowledge of their environment or the impending apocalypse they instead have dynamic reactive behaviours that change to suit the changes in the environment. The zombies in particular are not individually very intelligent with no understanding of buildings or entry points but when in larger numbers collectively through brute force they can accomplish their goals of infecting the entire population. All AI use algorithms to detect targets and threats that incorporate max visible range, field of view and line of sight to ensure that AI can only see each other or you when you are in front of them with no visual obstructions. The marine AI variants are also capable of cooperation working in squads with an appointed leader to accomplish goals together. This allows them to move whilst covering all arcs providing a nearly 360 degree of vision to combat any infected.

The custom built physics system uses circular and rectangular objects to simulate the map and its contents. Both ridged (Elastic) and lose(Inelastic) collisions. The ridged collisions handle impacts with AI and the player on each other and static objects in the environment such as walls and doors. The additional lose collision system is used to simulated explosions and fires that incorporate pressure and flow. This is done by allowing explosive particles to overlap each other and other entities, on the condition that when they are overlapped they repel one another. The results in situation where in which an area with may explosive particles will be simulating high pressure as the many particles will all be repelling each other with the collective forces accumulating substantial results. Doing this will cause them to rapidly repel, simulating an explosion. Any collisions with entities such as players or AI will cause them to be throw back and damage based on the direction of flow on the explosions. The flow may not always be radial as static walls impose impassable barriers any high pressure explosions will have to flow through any available exits resulting in directed charges This very system is also used to simulate the fire that is expelled from the available flame thrower weapon.

There are a variety of weapon categories (Pistol, Machinegun, Shotgun, RPG, Flamethrower and Mines), each of which have their own separate ammunition pools that you need to keep stoked up. When collecting weapons you can find a variety of different variants per category, so for the pistols there is the availability for Glock, Desert Eagle, M9, M1911, Makarov and so on, each of which emulates the attributes of the physical guns. You can carry as many weapons as you can manage, with each having its own weight that adds to your encumbrance managing the right balance of fire power verses mobility is vital. Bullets will do varying amounts of damage to entities depending on the accuracy of the shot, a direct hit will often kill in one shot where as it can take up to four rounds if each is a glancing hit. Every time a bullet hits and entity and causes damage it is able to continue through its trajectory damaging further targets. As it does so the bullet will lose velocity equal to that of the damage done on each impact and will eventually lose enough to become embedded in the next target or drop out of the sky.

You can have an unlimited number of saves to record your progress each with a name of your choosing. When saving you will be notified if your action would result in you overwriting an existing save.

More info and updates can be found on the gamejolt page.

Keep up to date on development news by following me: @ZombieFluidGame. 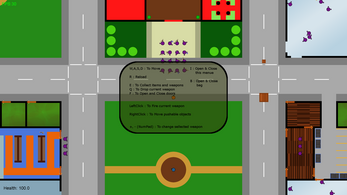 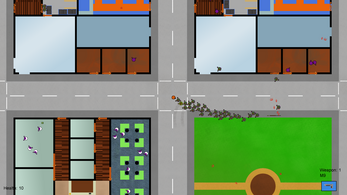 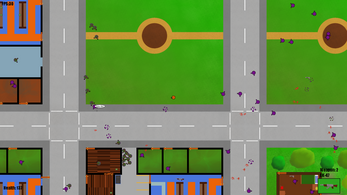